Dandruff or Seborrheic Dermatitis is a very common chronic skin condition that is characterized by flakiness, scaling and redness. It commonly affects the scalp, but may also affect part of the face like eyebrows and smile folds. The chest and the body folds may also be affected. In infants, it is called “cradle cap” when it affects the scalp. The etiology is a fungus called Pityrosporum Ovale. Treatment options include topical anti-fungal shampoos and creams like ketoconazole, selenium sulfide shampoos and topical steroids.

Can I get dandruff on my face?

Yes. One of the most common complaints in my clinic is when patient present with redness and roughness typically on the eyebrow area as well as some scaliness along the folds around the mouth. This is a typical presentation for dandruff. Dandruff, also known as seborrheic dermatitis, can’t be cured however it could be treated.

What are the different brands of shampoos used to treat dandruff?

The shampoos used to treat dandruff include prescription strength ketoconazole shampoo, over-the-counter shampoos such as Head & Shoulders, T-gel or Selsun Blue. Try not to get these in the eyes because it could start stinging and burning.

How do you treat dandruff?

Dr. Behnam typically prescribes an anti-fungal shampoo, such as ketoconazole, to be used on the affected area. The trick to using an anti-fungal shampoo is to leave it on the affected area for about 5 to 10 minutes in the shower, and then wash it off. In most cases, patients just use the shampoo just for a minute, but this is not sufficient. Never leave the shampoo on the skin overnight, as this will burn the skin. 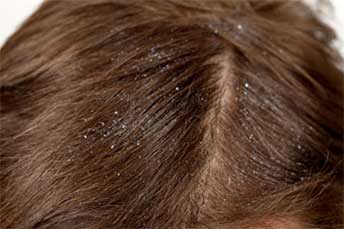 Dr. Behnam also prescribe Nizoral cream which is an antifungal ketoconazole cream that may be applied once a day to the face. In severe cases of dandruff, topical steroids such as desonide may be used as well to reduce the scaling and the inflammation. This is a low potency topical steroid that maybe used once or twice a day for 1 week. It is recommended that topical steroids not be used chronically as this could cause thinning of the skin. In patients who have persistent dandruff on the face that may not be controlled with the combination of a topical anti-fungal shampoo and an anti-fungal cream, Dr. Behnam may also prescribe non steroidal creams such as Protopic or Elidel. These creams are non steroidal creams and they maybe used to reduce the inflammation on the face.

Can I get dandruff from my barber?

Typically not. Dandruff is caused by fungus that is ubiquitous and that everyone harbors on the skin. For the most part, all patients have some dandruff. Some may have mild dandruff and some may have severe. At times of stress, dandruff can become more evident. There is no cure to dandruff. However one may control it with the topical shampoos and creams.