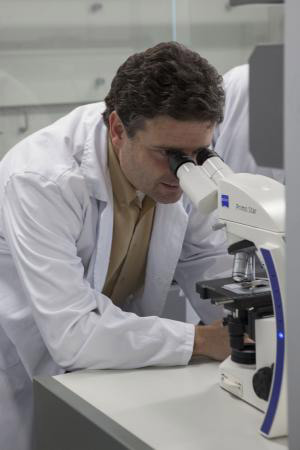 Conrado Martínez Cadenas, researcher at the Department of Medicine in the Universitat Jaume I.

When Homo sapiens left Africa and had to adapt to less sunny climates, there was a mutation in one of the genes responsible for regulating the synthesis of melanin, the MC1R gene, which involved a discoloration of the skin. This discoloration allowed for better absorption of vitamin D, necessary for growth, but it also increased the risk of developing skin cancer in adulthood. This mutation, called “V60L”, is at present the most common among people from Mediterranean regions such as Spain, Portugal, Italy and Israel. It is present in about 10-20% of the population, according to the study carried out by researchers at the Universitat Jaume I and the University of the Basque Country performed on over 1,000 individuals from different areas of Spain.

The V60L mutation is more common in people with light hair and skin tone that, despite being light, tans easily in the summer. This mutation is positive for the climate of the Mediterranean region, as it facilitates the absorption of vitamin D in the winter months, in which the ultraviolet radiation is lower. In the summer months, in which the radiation is greater, the ease to darken the skin pigmentation provides a certain protection. However, the study also revealed that among people with this mutation there is a greater predisposition to skin cancer. This discovery may be useful in the field of medical prevention.

The research results, published in the Molecular Biology and Evolution journal, reveal that the MC1R gene, which regulates the synthesis of melanin, is much more diverse in the Eurasian populations in sub-Saharan Africa. There, it remains mostly without mutations, thus giving to people the dark colour favourable to high solar radiation. Researchers have dated the rise of the V60L mutation between 30,000 and 50,000 years after the Homo sapiens left Africa and began to colonize Europe. Clear skin posed a better adaptation to the new environment where ultraviolet radiation was lower. Thus, being whiter facilitated the synthesis of vitamin D, a vitamin that is key in the periods of gestation and growth, in a way that its proper absorption is critical to the survival of the species. However, fair skin is also associated with an increased susceptibility to melanoma, the most aggressive type of skin cancer. In this sense, the researchers point out that as far as evolution is concerned, depigmentation has been favoured to ensure a better absorption of vitamin D and a proper development in the stage of pre-reproductive development at the cost of an increased risk of melanoma in the post-reproductive stage. “Melanoma has been an invisible illness to natural selection; it is the price that has to be paid for the improved survival of the species in areas of the world with low solar radiation”, states Conrado Martínez Cadenas, researcher at the Department of Medicine in the Universitat Jaume I.

Martínez Cadenas explains that in countries like Spain there are much less common variants of the MC1R gene called “capital R”. These variants are linked to a lighter colour of the skin and a reduced protection against ultraviolet rays, typical of people with very light skin and reduced ability to tan. Such mutations, more common in Northern European countries, pose a greater risk of skin cancer with a high exposure to ultraviolet rays. However, the researcher clarifies that there are many factors beyond genetics that influence on the risk of developing skin cancer, such as an excessive exposure to ultraviolet rays, having suffered sunburn in childhood, etc.

The MC1R gene is one of the genes that presents a higher genetic diversity in the human species, and all outside sub-Saharan Africa, unlike most of the rest of the human genome. This genetic diversity outside Africa is what has contributed to adapt the synthesis of melanin, and therefore the colour of the skin, to the different latitudes and levels of ultraviolet radiation from the planet. This collaboration between the University of the Basque Country and the Universitat Jaume I in Castelló has also helped to determine the genetic variability of this gene that exists within the Spanish population.

Research has been conducted by the researcher and doctor at the UPV/EHU Santos Alonso, with the participation of Dr. Conrado Martínez Cadenas at the Universitat Jaume I in Castelló as main researcher. Due to its great interest, both in the field of health and in the human evolution, it was selected for publication in the Sciencejournal among the most interesting publications in October.