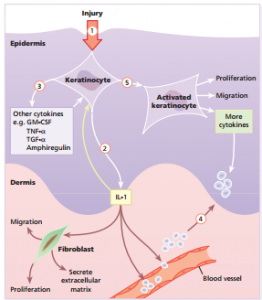 that a special mention has to be made of the peripheral arm of the immune system based in the skinathe skin immune system (SIS). The idea of an SIS as a functionally independent immunological unit is helpful. It includes the cuta neous blood vessels and lymphatics with their local lymph nodes and contains circulating lymphocytes and resident immune cells. Although it is beyond the scope of this book to cover general immunology, this section outlines some of the intricate ways in which antigens are recognized by specialized skin cells, mainly the Langerhans cells, and how antibodies, lymphocytes, macrophages and polymorphs elicit inflammation.

Some cellular components of the skin immune system Keratinocytes  Their prime role is to make the protective horny layer and to support to the outermost epithelium of the body but they also have immunological functions in their own right. Keratinocytes produce large numbers of cytokines , and can be induced by γ-interferon to express HLA-DR. They can also produce α-melanocyte-stimulating hormone  which is immunosuppressive. Keratinocytes play a central part in healing after epidermal injury . Langerhans cells  These dendritic cells come from the bone marrow and circulate through the epidermis, the dermis, lymphatics (as ‘veiled cells’), and also through the T-cell area of the lymph nodes where they are called ‘dendritic’ or ‘interdigitating’ cells. They can be identified in tissue sections by demonstrating their characteristic surface markers (e.g. CD1a antigen, MHC Class II antigens, adenosine triphosphatase) or S-100 protein in their cytoplasm (also found in melanocytes). Langerhans cells have a key role in antigen presentation. Dermal dendritic cells These poorly characterized cells are found around the tiny blood vessels of the papillary dermis. They bear MHC Class II antigens on their surface and,